The Aztecs / Mexicas were the Indigenous people who dominated northern Mexico at the time of the Spanish conquest led by Hernan CORTES in the early 16th century. 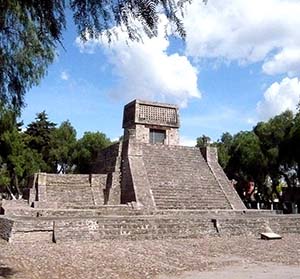 Fearless warriors and pragmatic builders, the Aztecs created an empire during the 15th century that was surpassed in size in the Americas only by that of the Incas in Peru. As early texts and modern archaeology continue to reveal, beyond their conquests and many of their religious practices, there were many positive achievements: the formation of a highly specialized and stratified society and an imperial administration, the expansion of a trading network as well as a tribute system, the development and maintenance of a sophisticated agricultural economy, carefully adjusted to the land and the cultivation of an intellectual and religious outlook that held society to be an integral part of the cosmos.

The yearly round of rites and ceremonies in the cities of Tenochtitlan and neighboring Tetzcoco, and their symbolic art and architecture, gave expression to an ancient awareness of the interdependence of nature and humanity.

The Aztecs remain the most extensively documented of all Amerindian civilizations at the time of European contact in the 16th century. Spanish friars, soldiers, and historians and scholars of Indian or mixed descent left invaluable records of all aspects of life. These ethnohistoric sources, linked to modern archaeological inquiries and studies of ethnologists, linguists, historians, and art historians, portray the formation and flourishing of a complex imperial state.

Clockwise, the days of the Aztec Calendar are as follows:

Religion was extremely important in Aztec life. They worshipped hundreds of gods and goddesses, each of whom ruled one or more human activities or aspects of nature. The people had many agricultural gods because their culture was based heavily on farming; also they included natural elements and ancestor-heroes. These gods included:

COATLICUE - She of the Serpent Skirt.

EHECATL, the god of wind.

HUEHUETEOTL, "the old, old deity," was one of the names of the cult of fire, among the oldest in Mesoamerica. The maintenance of fires in the temples was a principal priestly duty, and the renewal of fire was identified with the renewal of time itself.

HUITZILOPOCHTLI, (the war/sun god and special guardian of Tenochtitlan) the deified ancestral warrior-hero, was the Mexica-Aztec patron par excellence. His temple (next to that of Tlaloc) on the Main Pyramid was the focus of fearsome sacrifices of prisoners captured by Aztec warriors. Victims' heads were strung as trophies on a great rack, the Tzompantli, erected in the precinct below.

MICTLANTECUHTLE, god of the dead.

OMETECUHLTI and his wife OMECIHUATL created all life in the world.

QUETZALCOATL, (the god of civilization and learning) "quetzal (feather) serpent," had dozens of associations. It was the name of a deity, a royal title, the name of a legendary priest-ruler, a title of high priestly office. But its most fundamental significance as a natural force is symbolized by the sculpture of a coiled plumed serpent rising from a base whose underside is carved with the symbols of the earth deity and Tlaloc. The image of the serpent rising from the earth and bearing water on its tail is explained in the Nahuatl language by a description of Quetzalcoatl in terms of the rise of a powerful thunderstorm sweeping down, with wind raising dust before bringing rain.

TEZCATLIPOCA, (god of Night and Sorcery) "Smoking Mirror" (obsidian), characterized as the most powerful, supreme deity, was associated with the notion of destiny. His cult was particularly identified with royalty, for Tezcatlipoca was the object of the lengthy and reverent prayers in rites of kingship.

TLALOC, the rain deity, belonged to another most memorable and universal cult of ancient Mexico. The name may be Aztec, but the idea of a storm god especially identified with mountaintop shrines and life-giving rain was certainly as old as Teotihuacan. The primary temple of this major deity was located atop Mt. Tlaloc, where human victims were sacrificed to fertilize water-rocks within the sacred enclosure. In Tenochtitlan another Tlaloc temple shared the platform atop the dual Main Pyramid, a symbolic mountain.

TONATIUH, the sun, was perceived as a primary source of life whose special devotees were the warriors. The warriors were charged with the mission to provide the sun with sacrificial victims. A special altar to the sun was used for sacrifices in coronation rites, a fact that signifies the importance of the deity. The east-west path of the sun determined the principal ritual axis in the design of Aztec cities.

TONANTZIN, "honored grandmother," was among the many names of the female earth-deity.

XIPE TOTEC, the god of springtime and regrowth.

Cuauhtemoc, c.1495-1525, became ruler of the AZTECS in 1521, during the siege of TENOCHTITLAN, and led the final desperate resistance of that city against the Spanish conquistadors. After weeks of street fighting, he surrendered to Hernan CORTES. This act marked the end of the Aztec empire and the beginning of Spanish dominion in Mexico.

Cuauhtemoc was first treated kindly by the Spanish, then imprisoned and tortured, and finally hanged during Cortes's march to Honduras, on a charge of plotting treachery. A tomb below the church at his birthplace, Ixcateopan in Guerrero, is said to contain his remains, but not all scholars accept this attribution.

Castillo, Bernal Diaz, The Discovery and Conquest of Mexico, trans. by A. P. Maudsley (1956)

Cortez, Hernando ' "Cartas de Relación " (a series of five letters written by the conqueror to king Charles V, published in Spanish by Porrúa Hermanos and in English by Norton & Co. as translated by J. Bayard Morris)

Duran, Diego 's "Book of the Gods and Rites and the Ancient Calendar " (translated by Doris Heyden and Fernando Horcasitas in a 1971 edition by the Univ. of Oklahoma Press)

Hassig, Ross. Aztec Warfare: Imperial Expansion and Political Control. Oklahoma, 1988. An examination of the Aztec Empire in terms of its own goals and objectives.

Karen, Ruth. Feathered Serpent: The Rise and Fall of the Aztecs. Four Winds, 1979. The origins of the civilization, brutal cultural organization, and military conquest by Spaniards.

Leon-Portilla, Miguel. Aztec Image of Self and Society. Utah, 1992. "An Introduction to Nahua Culture" (subtitle).

Leon-Portilla, Miguel, ed. The Broken Spears: An Aztec Account of the Conquest of Mexico. Beacon, 1962. Translations of a selection of indigenous accounts of the conquest.