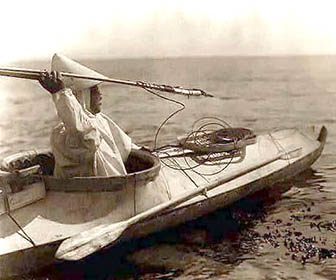 The Inuit harpoon has a large worldwide distribution; however, the most complicated pre-developed types of harpoons were developed among the Inuit people.

Customarily, the Inuit harpoon is displayed in a variety of structures. The essential components of the Inuit harpoon consist mainly of the shaft, head and line. Other devices were added and the harpoon was further developed in a numerous ways in order to make the Inuit harpoon more appropriate for hunting in certain circumstances.

Archaeologists verify that Inuit harpoon technology has been recognized in the Arctic for thousands of years. In these many years, there have been substantial changes made in harpoon machinery.

Modern Day Inuit Harpoons Todays Inuit harpoons characteristically have iron or steel rods as fore shafts and their heads are made from brass, steel or aluminum. Hockey sticks are occasionally recycled as shafts for light harpoons, and two-by-fours are frequently cut down for heavier artillery. It is typical of Inuit traditions to amend age-old customary harpoon technology in order to adapt to a changed atmosphere and it explains how the Inuit culture has been able to survive into the modern period.