Discover the meaning behind different drum beats and how the Native Americans used them. 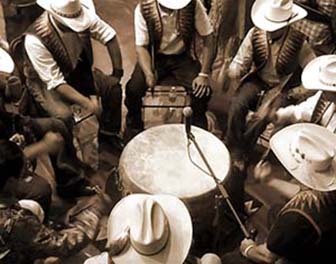 There have been a number of Indian tribes in existence and in all of them the drum was usually an important part of their culture. Each tribe had their own customs so it stands to reason that the drum beats also signified certain things.  Sometimes the meanings were vastly different from tribe to tribe.

Because the Indian culture has always been a big believer in the circle of life, many of them believe that the drum beats in their ceremonies were the heartbeat of their Mother Earth.  For the most part, the drum instrument played a part in many powwows and various spiritual and religious ceremonies.

The drum beats heard in these ceremonies were produced by a variety of drums.  There are hand drums that are used many times in spiritual ceremonies where a lot of singing and dancing occur.  Then there are the drums made out of animals like deer, elk, moose and even buffalo.  These drums are often played at tribal council and produce loud, booming drum beats.

Water drums are just as they sound.  They are drums that are partially filled with water.  The drum beats of water drums are distinctive and their sound differs depending on the amount of liquid in the drum as well as any physical activity. During peyote ceremonies, the native Indians produced drum beats from various sized instruments.

These drums were typically made from wood and some type of animal skin or hide.  The body of the drum was primarily made from wood native to the land.  The drum head played a big part in how the drum beats sounded.  Buckskin, cow’s stomach and other organ lining materials were often crafted into the drum head.

In short, drum beats speak to the participants in powwows, tribal council events or other ceremonies where drums are often utilized. Whether it is to emphasize a ritual dancing or spiritual event, the drum beats will live on in the heart of every Native American today.