The Choctaw Indians suffered greatly during the Trail of Tears. 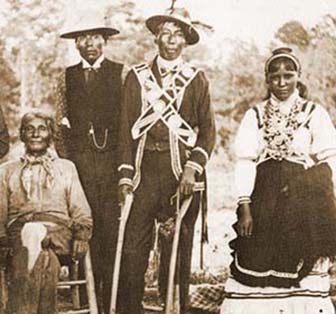 The Choctaw Indians were originally from the southeastern states of Mississippi, Louisiana, or Alabama. Pushmataha was the most famous Choctaw. The chief of the Choctaws, he negotiated treaties with the United States government and fought on the American side in the War of 1812.

The Treaty of Dancing Rabbit Creek in 1830 removed the Choctaw Indians from their land to reservations allotted for them. The United States government had the Choctaws moved to Oklahoma. Thousands of Choctaw walked the 500 miles journey to Oklahoma and there was much suffering. A bad blizzard in the region, combined with suffering due to lack of food, a wagon shortage, and suffering and death led this to become known as the Choctaw’s Trail of Tears. More than half of those that started out on the journey died before reaching Oklahoma.

The Choctaw Indians are responsible for giving America its oldest field sport, Stickball. Stickball was often used between Indian tribes as an alternative to war when settling disputes.

In both World War I and World War II, the Choctaw Indians proved to be very useful to the United States Army. Along with the Navajo, they were used as radio operators, broadcasting information in their native language. These “code talkers” were able to transmit secret military information over the radio because the enemies could not break their language, the “code.” It is believed that Albert Billy was the Choctaw Indian responsible for suggesting to his commanding officer that the Choctaw language be used to keep the enemy from stealing important military information. A story goes that one night; a general in the German army was captured. His only request was to know “what nationality was on the phones that night.” The general was only told that it had been Americans talking on the phones that night.