Apache tribes were known as fierce warriors and knowledgeable strategists. 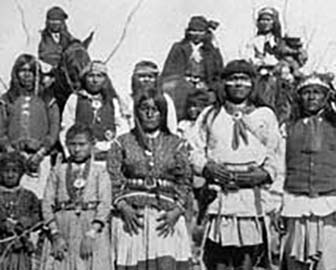 The Apache tribes are Native American Indians who inhabited the areas now known as Arizona and northwestern sections of Mexico. No one is sure of the origin of the name Apache, but there are many theories. The Apache tribes may have been named after the Yavapai word for people (epache), the Zuni word for enemy (apachu), or an unspecified Quechan word that means fighting men. The Apache were known for being powerful, brave, and aggressive.

It is believed that because their language is similar, that the Apache and Navajo were once a lone ethnic group.  The Apache were a large tribe, dating as far back as the early 1500s.

The Apache Indians were known to be quick to defend their homeland and seemed to always be at odds with the white man.  However, in the early 1800s, the Apache Indians were at war with the Mexicans. After a bounty was placed on Apache scalps, the leader of the Mimbreno tribe, Juan Jose Compas, was killed for the money.

The Apache tribes disliked the Mexicans so, that when the United States went to war against Mexico, the Apache promised to provide them with safe passage through their lands.

As the Apache and US military were able to keep peace for a while, it ended after Apache leader Mangas Coloradas attacked by miners, breaking the treaty the military and Apaches had earlier signed. The Apache began to fight against miner attacks. Eventually, Mangas Coloradas was captured and killed by the Army while trying to escape custody.

When the Apache tribes were in their prime, there were eleven major groups: Arivaipa, Chiricahua, Coyotero, Faraone Gileno, Llanero, Mescalero, Mimbreno, Mogollon, Naisha, Tchikun and Tchishi. The United States Army found their to be very fierce warriors and knowledgeable strategists. The last of the Apache tribe, the Chiricahua, surrendered in 1886. They were deported to Florida and Alabama prisons.